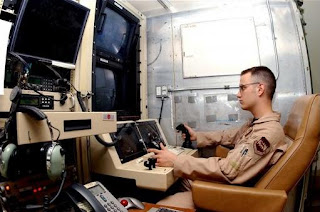 An attack drone killed Anwar Al-Awlaki, an American citizen, late last month. Now, computer systems at Creech AFB, NV, which run drone missions overseas, are infected with a virus, reports Danger Room article, "Exclusive: Computer Virus Hits U.S. Drone Fleet". "'We keep wiping it off, and it keeps coming back,' says a source familiar with the network infection, one of three that told Danger Room about the virus. 'We think it’s benign. But we just don’t know.'” The security status of the drone operation is summarized, "...specialists don’t know exactly how far the virus has spread. But they’re sure that the infection has hit both classified and unclassified machines at Creech. That raises the possibility, at least, that secret data may have been captured by the keylogger, and then transmitted over the public internet to someone outside the military chain of command." What's next? A false flag op with commandeered drones, remote piloted by Islamic terrorists?