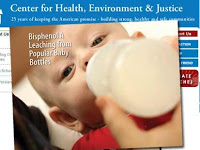 from abc: Despite more than two years of warnings about the possible dangers of the chemical bisphenol A (BPA), manufacturers continue to widely use it to make baby bottles, toys and beverage containers, and stores like Wal-Mart, Target, and Toys “R” Us continue to carry the products, according to a new study from the Center for Health Environment and Justice, a Virginia-based environmental activist organization.

BPA is a synthetic sex hormone that mimics estrogen. Scientists have linked low doses of BPA to obesity, diabetes, thyroid disease, breast cancer, prostate cancer and other illnesses in lab tests on animals.

(208kb PDF) for a guide on how to find a plastic-free baby bottle.

Read more about BPA and other potentially dangerous chemicals here.

Ninety-five percent of all baby bottles on the market are made with BPA, according to the study’s findings.

The authors of the study say the continued use of BPA is outrageous, given the evidence of its toxicity.

Some say the jury is still out on the risk of BPA.

Click here to read about some parents who are playing it safe with glass bottles.