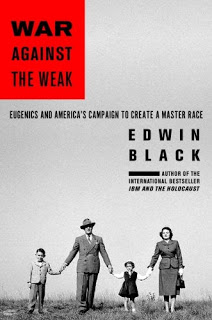 war against the weak: the movie

from spero news: War Against the Weak is to be released on January 24 at the Santa Barbara International Film Festival, the film based on investigate reporter Edwin Black’s opus on the origins of the eugenics movement in the United States, and its connections with Nazism. Hollywood luminaries Clint Eastwood, Kate Winslet and Mickey Rourke will be attending the festival and receiving awards at the prestigious event being held at the Santa Barbara Museum of Art in Santa Barbara, California.

War Against the Weak: The Movie has already been nominated by the festival for its Social Justice award. After years of intense research and collaboration with author Black, and painstaking filming from Long Island to Auschwitz by noted director Justin Strawhand and producer Pete Demas, the gripping film version of the groundbreaking investigation into the eugenics movement comes to the big screen. The production company's announcement comes as the movie begins the film festival circuit in preparation for mass distribution.

Based on the best selling book by Pulitzer Prize-nominated author Edwin Black, the film brings together thousands of hours of research in seven countries to tell the horrifying story of Eugenics - the quest to create a master race and eliminate 90 percent of the world’s people. A new Dialog Press paperback edition of the book is available at bookstores everywhere. Black is the author of several works of striking investigative journalism, including Internal Combustion and his latest two books, The Plan: How to Rescue Society When the Oil Stops – or the Day Before, and Nazi Nexus.

The producers have made available montages of scenes from the movie that are available even before the first public showing of the film. See:

edwin black on 'war against the weak'