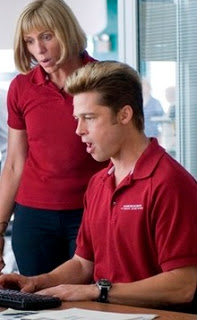 from danger room: It's like Burn After Reading, the latest Coen brothers' flick, come to life. Well, kinda sorta. "A New Zealand man has found confidential United States military files on an MP3 player," the Age reports. He bought at an Oklahoma thrift shop, for less than ten bucks. Chris Ogle wasn't looking for secrets during his little shopping trip, of course. But when he brought the player home and hooked it up, "he discovered a playlist he could never have imagined," New Zealand's TV One pants. The sixty files included personal details of American soldiers, equipment data, and what "appears to be a mission briefing." Most of the info comes from 2005, however. And there are no report of truly secret squirrel material. So it may not be enough to get Brad Pitt or Frances McDormand involved in a down-under remake, alas.

dod gets mp3 player with military data
from ap: U.S. officials took possession Wednesday of an MP3 player that a New Zealand man found held 60 U.S. military files, including names and telephone numbers of American soldiers, the man said. Chris Ogle, 29, from the northern city of Whangarei, said he bought the music player in February or March last year for $18 dollars at a thrift shop in Oklahoma City and found the files when he linked the device to his computer. "I was very surprised," he told The Associated Press. "I was curious enough to keep looking and I guess the more I looked the more intense it seemed to me," Ogle said. "Each time I looked at it I became more convinced ... it was possibly something bigger." The private information in the files included troops' Social Security numbers and even which female troops were pregnant. Details of equipment deployed to bases in Afghanistan, including the main U.S. base of Bagram, and a mission briefing were also found in files, most of them dated 2005. Some of the files included a warning that the release of the contents was "prohibited by federal law." Ogle, who lived and worked in Oklahoma for five years until last month, said he had no idea about the origins of the device before seeing it in the store, and that it "didn't really ever work" as an audio player, with the sound cutting out before "it made it even through an entire track." Two U.S. Embassy staff from the capital, Wellington, visited Ogle at his home Wednesday and took possession of the MP3 player, exchanging it for a new one. "That was cool. It was a pretty serious upgrade," Ogle said, laughing. U.S. Embassy officials did not immediately return calls for comment from the AP.