was contestant axed from reality show for being a satanist? 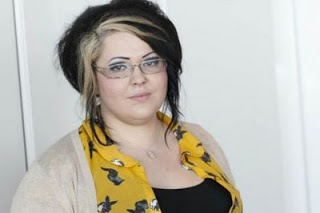 from metro.co.uk: X Factor viewers watched Kelly Rowland send Jade Richards home in favour of clean-cut acts like Janet Devlin, after reports suggested that Kelly was put off by Jade’s passion for satanism. The 21-year-old Fife native impressed Kelly and her fellow judges Gary Barlow, Louis Walsh and Tulisa Contostavlos when she first auditioned and sang Adele hit Someone Like You. But as she was shown the door on tonight’s show when Kelly picked her final four girls, friends of Jade claimed that she proved unpopular with her mentor and judging assistant Jennifer Hudson because she is a witch. Her love of The Occult has been well-documented over the past few weeks, with Jade apparently telling friends: “I’m so goth I f**k bats. I want to win X Factor and do it for the goths.” But now it seems that her satanist background has cost her a place in the series’ live shows, after Kelly was allegedly unhappy with Jade’s ‘goth’ style and her claim to be a witch. A friend told the Daily Star: “She’s tried really hard to tone down her image. Jade knows Kelly doesn’t understand her passion for Satanism and considers her a bit of a freak.”