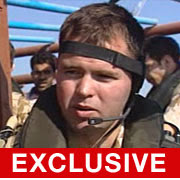 from blacklisted news/sky news: The captain in charge of the 15 marines detained in Iran has said they were gathering intelligence on the Iranians.

Sky News went on patrol with Captain Chris Air and his team in Iraqi waters close to the area where they were arrested – just five days before the crisis began.

We withheld the interview until now so it would not jeopardise their safety.

And today, former Iranian diplomat Dr Mehrdad Khonsari said if the Iranians had known about it, they would have used it to “justify taking the marines captive and put them on trial”.

Captain Air and his team were on an ‘Interaction Patrol‘ where their patrol boats came alongside fishing dhows.

The operation was mainly to investigate arms smuggling and terrorism but Captain Air said it was also to gain intelligence on Iranian activity.

He told Sky Correspondent Jonathan Samuels: “Basically we speak to the crew, find out if they have any problems, let them know we’re here to protect them, protect their fishing and stop any terrorism and piracy in the area,” he said.

“Secondly, it’s to gather int (intelligence). If they do have any information, because they’re here for days at a time, they can share it with us.

“Whether it’s about piracy or any sort of Iranian activity in the area. Obviously we’re right by the buffer zone with Iran.” 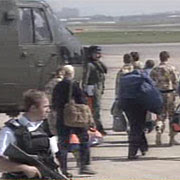 The UK Defence Secretary Des Browne told Sky News it was important to gather intelligence to “keep our people safe”.

He said: “Modern military operations all have an element of gathering intelligence.

“We need to understand as much as we can about the environment we operate in and intelligence gathering is an every day part of that.”

He added: “The UN mandate would clearly empower the military taskforce to gather information about the environment in which they were working.”

Captain Air said that fishing dhows had been robbed by Iranian soldiers on a number of occasions.

“It’s good to gather int on the Iranians,” he said.

Fifteen sailors and marines were taken captive nearly two weeks ago after the Iranian government claimed they had strayed into their waters.