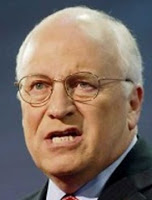 ‘we will, in fact, be greeted as liberators’

from thinkprogress: This Sunday will mark the fifth anniversary of Vice President Dick Cheney’s disastrous and uninformed prediction that U.S. troops would be greeted as liberators in Iraq:

CHENEY: Now, I think things have gotten so bad inside Iraq, from the standpoint of the Iraqi people, my belief is we will, in fact, be greeted as liberators. [3/16/03]

That same month - in March 2003 - McCain was parroting the Bush administration’s rosy talk, repeating on many occasions that “we will be greeted as liberators.” Cheney and the administration ignored numerous pre-war intelligence analyses which warned “that the U.S. would face armed resistance from Iraqis following the fall of Saddam Hussein’s regime.”

After the war began and an insurgency took hold in Iraq, the two cheerleaders of the Iraq invasion attempted to argue that they had been proven right – that the U.S. was greeted as liberators in Iraq. In Sept. 2003, Cheney told Tim Russert that “we have” been welcomed by “most Iraqis.” And following Cheney’s lead once again, McCain said in Jan. 2007, “We were greeted as liberators,” adding that the Iraq war was “easy.”

update: cheney's surprise trip to iraq
from thinkprogress: On his trip to Iraq today, Vice President Dick Cheney asserted there has been “phenomenal” improvements in security, hours before a suicide bomber killed at least 40 people. Cheney also asserted that Iraq has been a “successful endeavor.”

update: asked about two thirds of americans' opposition to war, cheney says, 'so?'
from raw story: Informed during a Good Morning America interview broadcast Wednesday that two-thirds of Americans now think the war was not worth fighting, Cheney said: "So?" ... The White House later released a transcript which shows that Cheney's first response wasn't "so" as ABC presented on its broadcast... The Vice President is in Oman. Today, he went fishing in the waters between Oman and Iran, borrowing the Sultan of Oman's 60-foot royal yacht.