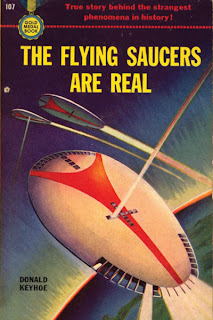 Mark Pilkington, author of Mirage Men, writes an excellent account of early ufology, from an intelligence point of view, in a Fortean Times article, "Weapons of Mass Deception". Pilkington begins with the Air Forces' "Project Grudge, an early effort "to study" unidentified flying objects (ufos), but intended primarily to suppress public interest. The effort proved successful, until Donald Keyhoe wrote a 1950 article that exposed the Air Force coverup in True Magazine, and later, expanded into a book, "The Flying Saucers Are Real". Keyhoe transformed ufos into a respectable topic, "the era of scientific ufology was born", writes Pilkington.

The ufo myth, as we know it, took form from a series of events, according to Pilkington, the first a film release in September 1951 of "The Day the Earth Stood Still" (link to full film) that "perfectly crystallised" the hopes and fears of the flying saucer movement, what an alien encounter could bring with Christ-like Klaatu's message of peace and his robot enforcer, Gort, capable of destroying the Earth. The film sparked a surge of ufo sightings and many within the armed services, which prompted the Air Force to issue JANAP 146(B), where servicemen could be imprisoned for up to ten years and fined 10,000 dollars for release of ufo information.

Another boost to ufology came from a April 1952 Life Magazine article, "Have We Visitors from Space?", which surprised many by its pro-extraterrestrial message in light of the authors spending a year consulting with the Air Force.  US newspapers carried over 16,000 ufo news items in the first six months of 1952 alone. By this time, ufo phenomena made policymakers nervous, CIA Director Walter B. Smith wrote in a letter, "...problems associated with unidentified flying objects appear to have implications for psycho­logical warfare as well as for intelligence and operations.” Smith’s concerns would prove to be uncannily prescient." The nervousness--the result of a combination of technology and paranoia--that characterized the Cold War with the former Soviet Union. Authorities were at war with ufology.

"On two nights in July 1952, a number of unidentified objects blipped onto radar screens at Washington DC National Airport. At close to midnight on the first night, 19–20 July, seven objects were tracked 24km from the capital city, gradually homing in on the White House at about 160km/h. A bright, orange ball of light was seen from nearby Andrews Air Force Base, making “a kind of circular movement” according to an airman on the scene, before taking off at “an incredible speed” and disappearing. Six bright white, fast-moving lights were also spotted by the pilot of a passenger jet flying in the area," reports Pilkington.

The DC overflights resulted in a media flurry, a press conference called the largest since World War II. The event described by Edward Ruppelt, first head of the Air Force Project Blue Book and coined the term "ufo", as a chaotic affair in his 1956 memoir, "The Report on Unidentified Flying Objects".  A link to a .mp3 recording of Ruppelt's book, which can be downloaded for free, is available here  from Librivox--very nice.

Leon Davidson, a chemical engineer at Los Alamos in the late forties, is the lost prophet of ufology, according to Pilkington.  The engineer joined a ufo group at Los Alamos fascinated by the green fireballs seen in New Mexico.  Davidson came to believe "...secret military tests lay behind these and most other UFO incidents, including the Washington overflights."

Davidson recognized similarities between descriptions of radar blips over Washington DC and those created by electronic counter measures and felt he knew who was behind it. "ECM + CIA = UFO or How to Cause a Radar Sighting" was an essay written by Davidson to expose the intelligence source responsible for the sightings. A great case is made for an intelligence operation by the engineer and points out the DC event was predicted by a CIA scientist and related to Ruppelt just a few days before it occurred!

"So were the Washington UFOs an early attempt to put the galloping ghosts under human control,"  Pilkington asks rhetorically in conclusion?   The author believes the ufo community would look different today if it had paid attention to the lost prophet, Davidson!  Pilkington's conclusion is the sightings are black operations not aliens!  A great read--a story that just keeps on giving!