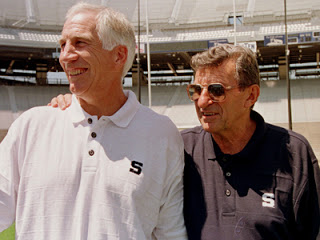 Jerry Sandusky, former Penn State asst. football coach, provides more details on relationship with Joe Paterno, fired Penn State head football coach, in a recent New York Times interview at his lawyer's home. A WPXI.com article nicely highlights additional aspects in Sandusky-Paterno relationship from the interview, which will be crucial in any legal proceeding. Sandusky is scheduled for preliminary hearing on Dec. 13."Penn State's board of trustees fired Paterno on Nov. 9 because it felt the football coach didn't go far enough in alerting authorities after an assistant coach said he told Paterno he saw Sandusky assaulting a young boy in the football building showers in March 2002," recaps article. An additional detail provided by article, "...Sandusky told the newspaper he and Paterno never spoke about the alleged 2002 incident or a 1998 child molestation complaint investigated by the Penn State campus police," may prove damning for Paterno.

Paterno wasted little time in hiring a high-powered Washington DC attorney, "J. Sedgwick “Wick” Sollers, who has represented former president George H.W. Bush in the past," according to Nov. 10 NYDailyNews.com account. A disquieting aspect emerges, by following scandal, which are the white spaces - or what did not make it into print!

Jon Rappaport, in his blog, provides excellent timeline of scandal dating back to 1998, which seems incriminating to all parties.  Rappaport recounts local area talk show host Mark Madden, who was willing to go on air with Sandusky may have been "pimping out young boys" to rich Second Mile donors. Madden pointed out, also, curious 1999 Sandusky retirement from coachng and absence of other coaching offers. Madden feels all parties were aware of scandal's extent, at the point, when Sandusky abruptly retired. These kinds of allegations, by their very nature, are not done in merely libelous manner!

Rappaport recaps disappearance of prosecutor Ray Gricar and curious facts associated with it.

"Sometime later, his laptop was found in a river, with the hard drive missing. Sometime later, the hard drive was found in the river bank, but it was too damaged to collect data from. Police, at Gricar’s home, examined his desk computer, and discovered that Gricar (or someone) had been doing searches on how to disable a hard drive. Gricar has never been found. What was so important on the hard drive? Evidence of wider pedophile activity? Did Gricar commit suicide? Was he murdered?"

It's certainly possible, on the other hand, Gricar disappeared for another reason in 2005 and may only declined to proceed with prosecution due to a lack of evidence!

"There was an author who wrote a book about a 1969 Penn State Murder, Pamela West, who became friends with the DA in 1985. At the time she was researching the crime, and sought out Gricar.

He advised her to write the book, but not name the person she suspected, as the individual was a high profile person. She wrote the book as a paranormal book titled: 20/20 Vision. The importance of this woman is she may have been the person with him in Lewisburg. Did she help his disappear? Was he in danger? Was the way he disappeared intended to be a message to law enforcement? Did they not think through the information left to them?

Kynzer supplies information, which could get someone killed, adding another dimension not previously encountered in the scandal!  You cannot make this stuff up! The scandal only gets more interesting the deeper you dig into its background!

Rappaport seems to forecast outcome before it's even gone to court, "keep watching. See if this accusation of pimping kids to rich men is dismissed as irresponsible incitement…and vanishes with no follow-up, no investigation." The question remains will perpetrators of sodomy remain above the law - untouchable - as in the past? Rappaport believes it will be the case!