welcome the winter solstice & turn toward the light

video: earth's northern half plunged into darkness by axial tilt!
will the sunlight ever return?* 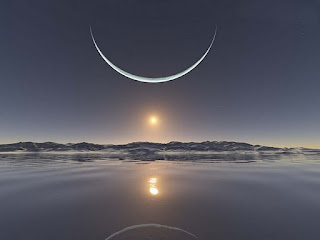 from ictmn: The winter solstice is almost upon us. In scientific terms, the winter solstice occurs at the precise moment when the axial tilt of earth’s polar hemisphere is the farthest away from the sun. That moment will arrive...at 12:30 a.m. EST (officially occurring on December 22nd) when the North Pole is tilted 23.5 degrees away from the sun, bringing about the shortest day and the longest night of the year. The winter solstice, by definition, is a term used to describe this single moment when the Earth’s maximum axial tilt to the sun is 23°23’.