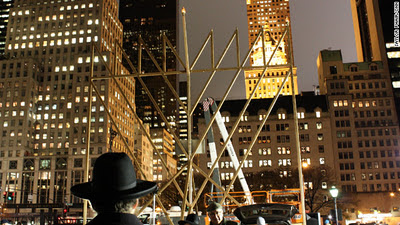 from cnn: From big balloons at the Macy's Thanksgiving Day Parade to a big Christmas tree at Manhattan's Rockefeller Center, the Big Apple is known for going big around the holidays. And on Tuesday, the first night of the Jewish holiday of Hanukkah, New Yorkers went big again, lighting a massive menorah outside the south side of Central Park.

The nine-branched candelabra is 32 feet tall, 28 feet wide, weighs 4,000 pounds, and is considered the world's biggest, according to the Guinness Book of World Records.

Rabbi Shmuel M. Butman, director of the city's Lubavitch Youth Organization, said the gold-colored steel structure is equipped with oil lamps and has special glass chimneys to protect the flames from wind.

The Brooklyn-based group has coordinated the lighting ceremony since it began in 1977, then coinciding with the administration of Abraham David Beam, the first Jewish mayor of New York City.

The massive structure was designed by renowned Jewish artist Yaacov Agam, according to Butman.

"The menorah is a symbol of inspiration not only for the Jewish people, but all people, regardless of race, color or creed," Butman said.

In the nation's capital, a special lighting ceremony near the White House also marked the start of the holiday.

"Tonight, as families and friends come together to light the menorah, it is a story that reminds us to count our blessings, to honor the sacrifices of our ancestors," President Barack Obama said in a statement. "To believe that through faith and determination, we can work together to build a brighter, better world for generations to come."