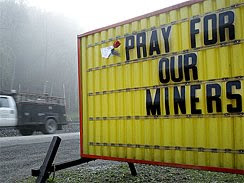 from ap: A huge underground explosion blamed on methane gas killed 25 miners in the worst U.S. coal mining disaster since 1984, and rescuers on Tuesday began a dangerous and possibly futile attempt to rescue four others still missing.

Crews were bulldozing an access road so they could drill 1,000 feet into the earth to release gases and make it safe to try to find the missing miners. They were feared dead after the Monday afternoon blast at a mine with a history of violations for not properly ventilating highly combustible methane.

Rescuers were being held back by poison gases that accumulated near the blast site, about 1.5 miles from the entrance to Massey Energy Co.’s sprawling Upper Big Branch mine.

They had to create an access road above it before they could begin drilling four shafts to release methane and carbon monoxide. Gov. Joe Manchin said at a news briefing Tuesday that it could be Wednesday night before the first hole is drilled.


It had already been a long day for grieving relatives, some angry because they found out their loved ones were among the dead from government officials, not from Massey Energy executives.

“They’re supposed to be a big company,” said Michelle McKinney, who found out from a local official at a nearby school that her 62-year-old father, Benny R. Willingham, died in the blast. “These guys, they took a chance every day to work and make them big. And they couldn’t even call us.”

McKinney said her husband is a miner too and her 16-year-old son doesn’t want him to go back to work. Willingham, who had mined for 30 years, the last 17 with Massey, was just five weeks from retiring and planned to take his wife on a cruise to the Virgin Islands next month.

U.S. Rep. Nick Rahall, D-W.Va., said at a press briefing Wednesday that Massey should have been in better contact with families. He also pledged a congressional hearing on the explosion.

“If we need new laws, then let’s go for it,” Rahall said. “Every mine safety law on the books has been written with coal miners’ blood, following some tragedy.”

One response to “west virginia worry: 25+ killed in massey coal mine explosion”