west virginia lawmaker drinks bottled ‘coal slurry’ to highlight plight of his constituents
from raw replay: A West Virginia state Senator made a statement about the quality of his constituents’ drinking water by drinking a bottle of what he called ‘coal slurry’ on the Senate floor. WSAZ reported: “Senator Randy White (D-Webster) introduced a bill on the senate floor that limits coal slurry sites from making changes to their permits until the Department of Environmental Protection releases its findings on whether the ground water in these areas is safe to drink. Right now, there are 15 active coal slurry sights, according to White. This is where coal companies can inject coal slurry, the liquid and solid waste left over from the mining and preparation process, in abandoned underground mines. White says he drank the 12 ounces of liquid Thursday to make a statement. The senator tells WSAZ.com he wants other lawmakers to realize there are health concerns when it comes to drinking coal slurry water. He says lawmakers are elected to protect their constituents’ health and they need to be held accountable to make sure they’re doing just that. This video is from WSAZ, broadcast Mar. 12, 2009.

independent lab tests: metals in wv coal slurry
from examiner: West Virginians eager to know what’s in the slurry that coal companies pump into worked-out underground mines will have to wait until May for the state’s answers, but preliminary independent tests suggest it contains heavy metals they wouldn’t want to drink. 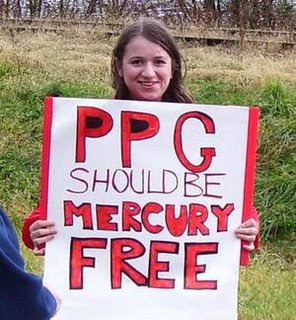 from examiner: Two environmental groups have put PPG Industries on notice that they intend to sue over mercury releases into the Ohio River from a West Virginia plant. The West Virginia Rivers Coalition and the Washington, D.C.-based group Oceana filed a 60-day notice of intent to sue on Monday against PPG’s Natrium plant. The notice was filed pursuant to the federal Clean Water Act. In a letter to company officials, the groups said the Wetzel County plant continues to release mercury at levels exceeding its waste water discharge permit. The plant produces chlorine by pumping saltwater through vats of pure mercury. Mercury is a neurotoxin that accumulates in fish. Ingesting mercury can cause nerve and brain damage to pregnant women, women of childbearing age and young children. Mercury also can lead to kidney damage in children.