where’s the transparency in the ‘security & prosperity partnership’? 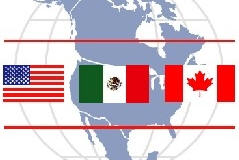 from globe & mail: On Aug. 20 and 21, the leaders of Mexico, Canada and the United States will meet in Montebello, Que., to discuss the so-called Security and Prosperity Partnership. It provides a vision for North American integration that most Canadians, Americans and Mexicans would reject.

Governments in all three countries have dodged political or public debate about the SPP, and it is often those of us against its vision for North America who end up on the defensive, accused of hampering discussion.

The Council of Canadians, Canada’s largest citizens’ advocacy group, has been following SPP developments since it was launched in March of 2005. Our organization is not against international co-operation. We are concerned, however, about the nature of the co-operation between the executive branches of our government and the big business community established by the SPP.