meanwhile, apple inc. has more cash on hand than the govt… 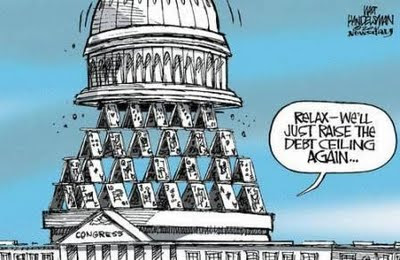 from afp: With barely two days to act, US President Barack Obama and top lawmakers closed in on Sunday in on an ambitious deal to avert a disastrous debt default sure to sow chaos in the fragile world economy.

Senior Obama adviser David Plouffe indicated on NBC television there was an emerging consensus but no solid agreement yet to raise the $14.3 trillion US debt ceiling ahead of a midnight Tuesday (0400 GMT Wednesday) deadline.

“We don’t have a deal. The hours are ticking,” Plouffe said on NBC, stressing: “We have to get this solved. Today is obviously a critical day.”

The US economy hit its debt limit on May 16 and has used spending and accounting adjustments, as well as higher-than-expected tax receipts, to continue operating normally – but can only do so through midnight Tuesday.

Business and finance leaders have warned default would send crippling aftershocks through the fragile US economy, still wrestling with stubbornly high unemployment of 9.2 percent in the wake of the 2008 global meltdown.

Without a deal, the US government would have to cut an estimated 40 cents out of every dollar it spends, forcing grim choices between defaulting or cutting back programmes like those that help the poor, disabled and elderly.

Any compromise would still need to clear the divided Democratic-led Senate and Republican-held House of Representatives, where conservatives close to the “Tea Party” movement have called for draconian belt-tightening.