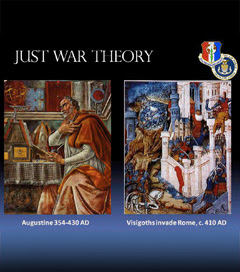 from truth-out: The Air Force, in response to an exclusive report published by Truthout earlier this week, has withdrawn materials used in a training session that relied upon passages from the New and Old Testament and a quote from an ex-Nazi SS officer to teach missile officers about the morals and ethics of launching nuclear weapons... The course was led by Air Force chaplains and took place during a missile officer's first week in training at Vandenberg Air Force Base in California. Officers who train to be missileers were required to attend the ethics course, which included a PowerPoint presentation on St. Augustine's "Christian Just War Theory" as well as numerous examples of characters from the New and Old Testament the training materials asserted engaged in warfighting in a "righteous way."