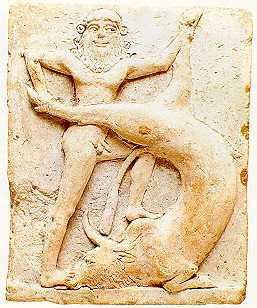 Who are Gilgamesh and Enkidu?

I will here try to find the deeper aspects of these beings in the esoteric history of man, looking at them as persons and as symbols. The first part will mainly build on Rudolf Steiner’s “Occult History” lectures 1 and 2, concentrating on the persons of Gilgamesh and Enkidu, or Eabani as Steiner calls him. In the second part I will look at the events on the spiritual plane to show their symbolic nature.

As the previous quote says, Gilgamesh is a being with enormous potential.

Now Gilgamesh was a personality who had many incarnations behind him and may therefore be called an “old” soul within the evolution of humanity…The souls who came down early have therefore more incarnations behind them in earth-evolution than those who came down later; hence we can call these latter, in contrast to the former, “younger” souls — souls who have taken less into themselves…
In the case of Gilgamesh, the Being who was to reveal himself through him, and who could do so only by leading him presently to a kind of initiation, kept a guiding hand upon him from the outset and set him at the place where he came to recognize his own position in the history of the world…
The whole nature of an old soul will enable it early in life to grasp not only the essential element, the essential factor, in the existing culture, but also that which strikes into it as a new impulse, opening up a wide vista into the future.

Gilgamesh incarnated back in Lemuria, maybe as the first of the development wave of man. Through his many incarnation he had reached a stage about where man were at  the time of the Maid of Orleans. This is one of the reasons why RS uses the word personality about him, he has developed the Ego as no other person have at this time in history, he have lost all connections to the spiritual world, and is as Ahrimanic as a man can be, as the son of Adam, Cain. His task is to form the development of the Earth, he is the archetypal Hero.

The account begins: Gilgamesh, two-thirds god and one-third human, is the greatest king on earth and the strongest super-human that ever existed;

It could be understood as nephesch (sentient soul) and ruach (mind soul) are full developed, but that n’schamah (consciousness soul) is not, two out of three."

Enkidu (Eabani) is a diametrical different being; Enkidu is a being with few incarnation, ego-less and without karma, he lives in innocence with the animals. Through Enkidu’s encounter with a woman he acquires karma and becomes part of humanity, becomes part of civilization.

Eabani is a kind of human being who, in comparison with Gilgamesh, seems to be of an inferior nature, for we are told that he was clothed in the skins of animals, was covered with hair, was like a wild man. Nevertheless in his wild nature there was divine Inspiration, ancient clairvoyance, clairvoyant knowledge, clairvoyant perception.
…
Eabani is depicted as being clothed in skins of animals. This is an indication of his wild nature; but because of this very wildness he is still endowed with ancient clairvoyance an the one hand, and an the other hand he is a young soul who has lived through far, far fewer incarnations than other souls who have reached a high level of development. Thus Gilgamesh represents a being who was ready for initiation but was not able to attain it, for the journey to the West is the journey to an initiation that was not carried through to the end.

In contrast to Gilgamesh, Enkidu is a young soul, without Ego, but with highly developed spiritual faculties, which Gilgamesh have lost. It can be said that Enkidu is the most Luciferic being born on Earth.

Enkidu’s task is to give Earth the Heavenly Wisdom to help man form the future. He is the archetypal Seer or Priest, as the son of Adam, Seth, the last born.