why are oregon’s children so hungry? 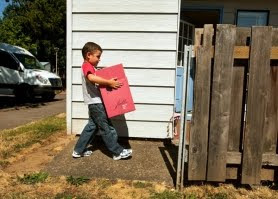 from portland tribune: A new national report shows just how much Oregonians have suffered in the depths of the national recession. The report by Chicago’s nonprofit Feeding America reveals that in 2009, Oregon had the highest rate of childhood hunger among the 50 states. Only Washington, D.C., had a higher rate. The report says that 29% of Oregon (and Multnomah County) children faced “food insecurity” in 2009, compared to a national average of 23%.