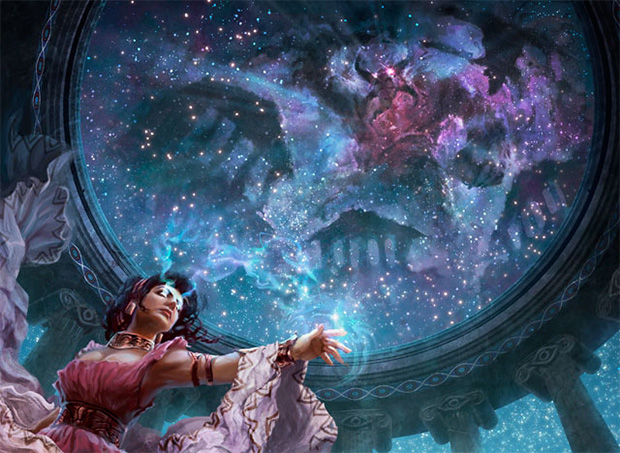 Why Study the Divinatory Arts? from jwmt.org: The study of divination in the hermetic arts is a long-standing tradition. Today there are several favored methods of divination employed by magicians and magical groups, the most common of these likely being tarot, astrology and geomancy. A common question among those new to the hermetic arts, and even amongst those who are not so new, is "I don't like doing tarot readings or astrology, I'm never going to use it; so why should I study divination?"

The study of the divinatory arts, especially the three primary forms mentioned above, does in fact serve as a valuable teaching aid and tool to the student and magician. I will discuss not only how the study of these three methods of divination are useful to learn in and of themselves but also how their study can further enhance the student as a magician overall.

The tarot is the youngest of the three major modes of divination, the first tarot cards appearing sometime in the fourteenth century. Today the tarot is perhaps one of the most popular forms of divination available; it is used not only by hermetic magicians but by pagans, psychics, New Age adherents and many others. The hermetic tarot blossomed in the late 19th century with the Hermetic Order of the Golden Dawn (GD) and their tarot attributions. Until recently almost every tarot deck available to the public was in some way derived from the GD's deck, usually through the so-called "Rider-Waite" tarot.

The study of the hermetic tarot is highly valuable to the modern magician. Each tarot card, in either the major or minor arcana, is full of hermetically and Kabalistcially based symbolism. The major arcana teaches of the Hebrew alefbet, astrological and elemental attributions, vast amounts of symbolism as well as an idea of how each path on the Kabbalistic Tree of Life functions within the hermetic arts. The minor arcana delve into astrology, angelology and even the Shem ha-Mephoresh or "Divided Name". Taken together, a study of the tarot cards themselves can lead to a greater understanding of Kabbalah and the Tree of Life as well as the meanings of each card.

The tarot is, of course, also a form of divination; as such it can be used not only to help divine future events[3] but numerous other subjects. A brief glance at the multitude of tarot spreads, from the famous "Celtic Cross" to the Golden Dawn's "Opening by Key" to tarot sites filled with new spreads shows the extreme versatility of the tarot as a divinatory tool. Through the use of tarot divination the magician can often better understand the circumstances surrounding their lives and discover hidden influences that may be affecting them. As many occult paths teach their students to first invoke the divine or a guide before doing a tarot reading, the magician's skills in such matters are also improved with each reading performed.

All of these benefits can be gleaned simply from the study and practice of the tarot. Beyond this, however, there is a deeper level of understanding and ability that can be gained.

While the study of the hermetic tarot cards provides the magician or diviner a deeper understanding of the cards themselves, as well as the Kabbalistic Tree of Life, it also provides a great tool for the magician in other areas of the Art. At least since the era of the GD, tarot has been used not only as a divinatory tool but also as a way to reach other levels of consciousness through the arts of "Skrying in the Spirit Vision" and "Traveling in the Spirit Vision", more commonly known as skrying and astral traveling. A deep understanding of the tarot is necessary if they are to be successfully and usefully employed in such a way. Beyond this tarot can also be used as a focus for magical work, be it talismanic magic or meditational practices or full blown ritual work trying to bring the qualities of the card worked with into manifestation.

Tarot divination is, of the three forms discussed here, the also most intuitive and most requiring the ability to function on an almost purely symbolic level of understanding. Every time a reading is done the diviner, if he or she is to tap the fullest potential of the art, must at some point transcend their normal consciousness to reach the world where symbols are more than mere images but are realities in and of themselves. At a higher level still the diviner may tap into that part of the soul where the mind meets the divine and Truth is known or intuited.[4] Reaching either of these levels within the divinatory arts can make each tarot reading a mini skrying session; each card opening up to give the diviner deeper insight into the question than its mere physical or pictorial symbolism could ever provide.

Geomancy, as practiced in Western Europe since the middle ages, is the next oldest form of divination to be discussed. During its heyday geomancy was perhaps one of the most popular and widely practiced forms of divination.[6] Today, in deep contrast, geomancy is almost unknown to most practitioners of Western divination, and what little is known or practiced lacks greatly in detail or imagery from its former glory.[7]

The study of geomancy as a divinatory art has, like the study of tarot, many benefits. In this study knowledge of planetary spirits and astrology is to be found. Through its practice one learns to enter a state of mu-shin[8] as well as the art of evocation. Some also assign the 16 figures of geomancy to the Tree of Life, and thus new insights can be gained in that area as well.

Geomancy has two distinct phases. The first phase involves this mo-shin like state and evocation. Here the diviner follows specific formulas to create a basic reading. While this is fairly diagrammatic in nature a certain amount of intuition is necessary to come to correct conclusions. The second phase is astrological in nature. Here the diviner must not only be conversant in geomancy but also in classical astrology. Thus the study of geomancy teaches not one but aspects of two different forms of divination. The benefits of the study of astrology will be discussed below.

Knowledge of geomancy is useful far beyond the realm of divination. Each of the 16 geomantic figures corresponds to numerous astrological associations as well as corresponding energies in the Earth. This gives the geomantic magician a set of tools for not only divination but also a specialized form of talismanic magic and even full-blow evocation and even skrying. A deep study of classical and modern geomancy could very well be developed into a complete course of occult practice.

Astrology is perhaps the one of the oldest formalized types of divination. In varying forms astrology can be found in cultures the world over, from China to ancient Babylon to the Aztecs to Europe. There are numerous types of astrological divination available to the diviner. Natal astrology is the most common of these but by no means necessarily the most useful to the divining magician; horary, electional and synastry astrology are also prominent forms of astrological divination, just to name a few.

The study of astrology is one of the corner stones of hermetic occultism and a complete study of all of its ins and outs could take a lifetime. Likewise, trying to discuss every benefit to be gained from its study could fill several libraries. Such a study would develop into knowledge of the stars, planets and even time, on both a physical and magical level. It has been seen that both tarot and geomancy heavily depend upon astrology, thus a study of astrology will only enhance ones understanding of either of the other two forms of divination, even more so than a study of them will enhance one's knowledge of astrology.

As with tarot and geomancy, the study of astrology has uses beyond that of divination. Many hermetically derived forms of magic, as well as many pagan oriented magics, are heavily based on astrology. For instance Denning and Philips Planetary Magic is a work based almost entirely on astrological magic. Almost all classical grimoires have the magician perform certain rites and actions according to planetary hours and days and many spirits, include those of the Goetia are planetary in nature, as are intelligences and angels. Much like geomancy, a complete system of magic could be constructed around astrology with little input from other systems. Thus, talismans, magical weapons, invocation, evocation, skrying and, of course, divination are all arts which can be developed from the study of astrology, making astrology one of the most complete divinatory and magical systems available for study.

What is missing from this discussion? In truth a great deal. It is veritably impossible to discuss every aspect of just these three divinatory modes, let alone the hundreds of different systems in dozens of different traditions. For instance, a study of ogham would not only teach the student a form of divination but would also teach the place the ogham has in its culture. One would learn Irish tree mythology and the magical powers of those trees. This could also branch into an beginners understanding of herbalism based on the ogham fidhs. A study of the I Ching would not only provide insights into Chinese geomancy but also Taoism. The study of a single divinatory tool could literally take a lifetime and encompass countless subsystems related to that one tool.

The study of divination, regardless of the system, is a valuable tool in the repertoire of the magician. Besides the more obvious advantages that studying divination brings the possibility for enhancing one's overall magical practice is enormous. The divinatory art, especially those discussed here but by no means limited to them, contains within itself the keys to a complete study of magic, be it divinatory, skrying, thaumaturic or therugic in nature. Simply put, the study of divination is the study of magic.