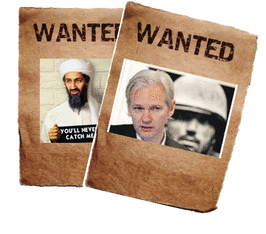 from activist post: Over the weekend, an insightful article by Zen Gardner exposed how WikiLeaks resembles an establishment creation. The article correctly pointed out that the WikiLeaks storyline was conforming nicely to the elite's problem-reaction-solution method, with the solution of more tyranny for our safety. WikiLeaks is being used to bring in the agenda on so many levels, but most importantly by setting the precedent of shutting down websites for politically 'dangerous' content. Gardner writes:

"After all, if information is now the enemy, we must carefully police any and every aspect of this dangerous medium - all for the safety and protection of 'we the people.' Oh, we’ll still have the Internet, just like you can still fly. You’ll just have to be on the 'approved' list, screened, stamped, zapped, mugged and molested if you want to get 'on the net.' No biggie. Thanks Julian -- job well done."

First, let's be clear, the 250,000 pages of cables amounted to some geopolitical Jerry Springer he-said-she-said nonsense to make countries look petty and stupid. They revealed nothing new that wasn't already known or well suspected. The information simply stoked existing flames by airing geopolitical dirty laundry, nothing more - no secret weapons, no major arms deals, no tactical locations of troops, and no revealing the ID of secret agents, etc.

Yet, the government has used its corporate muscle to illegally limit access to WikiLeaks. It was recently revealed that Amazon, the server host for WikiLeaks, caved to political pressure to drop the website. Then, in dictatorial fashion, PayPal removed its service for donations to WikiLeaks, and now their bank account has been frozen. And all this comes a week after the shutdown of 80-plus websites for "copyright infringement," apparently in preparation for passing the "Blacklist" bill.

Thanks to brasschecktv for their Wikileaks coverage!