will multiple nukes in US cities lead to armageddon? 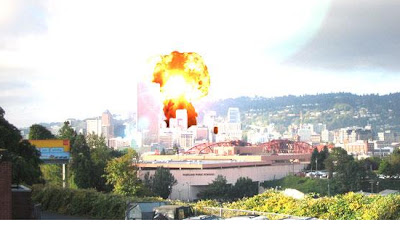 Most Americans remain – willfully ignorant – as George Carlin once phrased it to dangers on their own soil! Paul McGuire convinced America will witness evil, writes article, “Multiple Nukes Going Off In US Cities.” McGuire compares miniscule Hiroshima bomb to a 25 Megaton or even a Megaton bomb. The writer implies this may be on agenda towards a One World Government (New World Order).  Grants Pass, OR, projected also as a safe refuge in a post-Apocalypse period by News With Views.com website, which hosts the McGuire article. Portland, OR (pictured) turns up repeatedly as a favored target on the other hand, as only intermediate-sized city to draw attention as a subject.  A bizarre 2009 fictional slideshow, Operation Black Jack lists Portland as well as a research report, “The Day After“ (pdf), sponsored by Harvard and Stanford Universities. McGuire is guided prophetically in his writing and believes a conflict looms on horizon of Armageddon proportions!