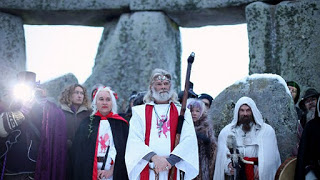 from national post: Depending on where you are in the world, December 21 or 22 marks the winter solstice in the northern hemisphere: the official beginning of winter, and the longest night of the year. (In Canada, the switch happens either late at night on the 21st, or early in the morning on the 22nd; for those on Eastern Standard Time, the new season begins at 12:30 a.m. December 22).

The days may seem dark, with those living in Vancouver getting a little more than eight hours of daylight, Calgarians a little under. And pity light-deprived Iqaluit, which at this time receives a little over four hours of daylight, while places north of the Arctic Circle are dark for several months.

The bright side? The days will start — imperceptibly at first — to get progressively longer, up until the summer solstice in June.

The word “solstice” is Latin for “sun-stand still,” and the annual celestial event is celebrated in many cultures around the world. In Stonehenge, England, thousands gather to dance and sing while watching the sunrise over the stones. For the Chinese, the winter solstice brings families together as many take part in the tradition of making glutinous balls of rice. Street processions are a common feature on this day in Japan and Ireland.