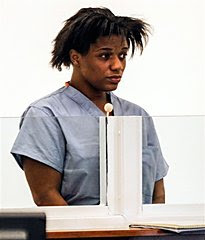 from salemnews.com: Witchcraft Heights Elementary School has been reaching out to students and staff since the violent incident Sunday night at the Salem Heights apartment building. Tanicia Goodwin, 25, has been charged with slashing the throats of her two young children and setting their apartment on fire in a murder attempt. Her son, Jamaal Goodwin, 8, a first-grader at Witchcraft, remains in critical condition at Children's Hospital Boston, according to a family member. His younger sister is also at the hospital, reportedly in stable condition. Witchcraft Principal Mark Higgins and teachers spoke with students the day after the incident. Letters were sent home. Outside counselors were called. This incident hit Witchcraft especially hard because it has 14 students who live in Salem Heights, a large apartment building on Pope Street. Many had to flee the building Sunday night.

I have not seen the news stories on this incident mention that the Goodwin children of Boston were the first cases of witchcraft documented by Cotton Mather, leading to the Salem Witch Trials.