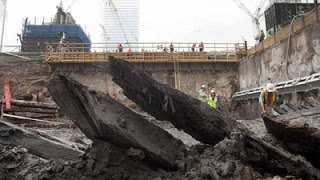 from skynews: Archaeologists working at the World Trade Centre site in New York have found the remains of a wooden ship apparently buried there more than 200 years ago.

The remains of the 30ft length of a wood-hulled vessel were found when workers excavating the site, where a new World Trade Centre is being built, hit a row of wood timbers, The New York Times reported.

"They were so perfectly contoured that they were clearly part of a ship," said archaeologist A. Michael Pappalardo. The archaeologists have been working on the site - scene of the 9/11 terror attacks in 2001 - to document historical material uncovered during construction. They estimated that the vessel could date from the mid to late 1700s. 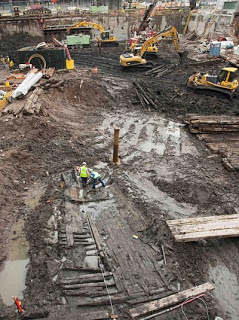 In the late 18th and early 19th centuries wooden cribbing was used to extend lower Manhattan further into the Hudson River. The vessel was discovered about 20 to 30 feet below street level on the World Trade Centre site. The area under excavation had not been dug out when the original Twin Towers were built in the 1960s and 1970s.

Mr Pappalardo said the whole vessel may have been two or three times longer than the portion found. He and his team believe the the hull had been deliberately truncated and had probably been used as landfill material. Workers also found a 100lb anchor in the same area on Wednesday, but they are not sure if it belongs to the ship.