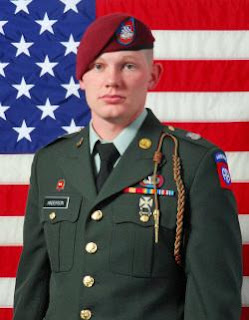 from danger room: Everybody is dumping on Facebook right now – & CEO Mark Zuckerberg’s non-apology apologies for giving away his customers’ personal information aren’t exactly helping matters. But in the military community, there’s an interesting twist on the Facebook-as-privacy-sieve debate. Turns out the names of soldiers dying in Afghanistan are sometimes appearing on Facebook before they’re officially released.

This is not a small deal in military circles. U.S. bases in Iraq and Afghanistan go into what’s called “River City” - with access to the outside Internet shut down - when one of their troops is killed in action. The idea is to give time to notify next-of-kin before word of the death leaks out.

Last Wednesday, however, King’s College of London PhD student Daniel Bennett was able to penetrate that veil of silence. With a few clicks of the social media search engine Kurrently, Bennett found Facebook chatter about the death of 20 year-old Pfc. Billy G. Anderson (pictured) in Afghanistan’s Badghis province. The Pentagon didn’t announce that Anderson had been killed until two days later, on Friday the 21st.

From what I can tell, this Facebook leak appears to have come from Anderson’s parents, indirectly. On Tuesday the 19th at 9:09am, Robin McAllister Vance wrote on her Facebook wall: “Please pray for the family of Billy Anderson. This is the son in law of Gina Lewis, who works with me in Accounting. They learned yesterday that Billy was killed in Afghanistan. Billy is survived by a young wife and baby girl.” But I’m guessing news of other battlefield deaths has spread on Facebook even faster, before families heard the news.