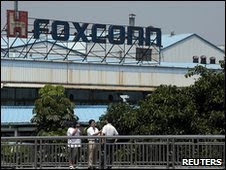 another suicide at foxconn, 9th this year at chinese iphone firm

from bbc: In China a factory worker has died after falling from a high building, the latest in a string of such deaths at the same plant. The man, who was 19, was employed by Foxconn, a Taiwanese firm also known as Honhai.

The firm makes mobile phones, games consoles and computers for companies like Apple, Hewlett Packard and Sony. Nine people have died after falling off buildings at the factory this year. Two others were seriously injured.

Police are not saying yet whether this was a suicide attempt, a suspicious death or an accident. It happened just one day after Foxconn started playing music to workers on the assembly line to try to ease the pressure on them.

Before this latest incident the company's founder had denied he worked his staff too hard. But he had promised a plan to improve working conditions within a month.