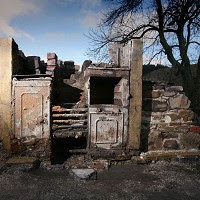 from ukpress: Water engineers have unearthed what could prove to be one of the most infamous sites in England’s history of witches and warlocks. United Utilities’ workers were “stunned” to discover a 17th century witch’s-style cottage, with a mummified cat sealed into the walls, during a routine construction project in Pendle, Lancashire. The “spellbinding” find occurred near Lower Black Moss reservoir in the village of Barley, which nestles in the shadow of Pendle Hill – the UK’s premier witching hotspot. Speculation is already rife among local historians that the building could be the lost Malkin Tower – the site of a notorious meeting of the Pendle witches on Good Friday, 1612. Archaeologists brought in by the North West water firm to survey the area found a remarkably well-preserved building from the 1600s, hidden beneath a grass mound. The building contained a sealed room, with a mummified cat bricked into the wall. It is believed the cat was buried alive to protect the cottage’s inhabitants from evil spirits. Carl Sanders, United Utilities’ project manager, said: “It’s not often you come across a fairytale cottage complete with witch’s cat. The building is in remarkable condition. You can walk through it and get a real sense that you’re peering into the past.” Simon Entwistle, an expert on the Pendle witches, said: “In terms of significance, it’s like discovering Tutankhamun’s tomb. We are just a few months away from the 400th anniversary of the Pendle witch trials, and here we have an incredibly rare find, right in the heart of witching country.”