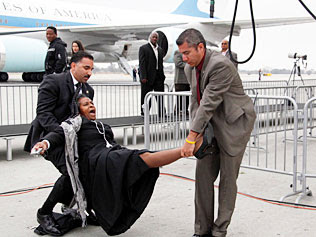 writer forcibly removed from near air force one

from herald sun: A writer for a small newspaper attempted to hand US President Barack Obama a letter, but was forcibly removed from a press area near Air Force One today [may29], shortly before Mr Obama arrived at Los Angeles airport. In bizarre scenes, airport security officers carried the woman away by the feet and arms. She was later allowed to leave without charge. Brenda Lee, a writer for the Georgia Informer in Macon, is a "Roman Catholic priestess" and was carrying a letter she had written opposing gay marriage. She had White House press credentials, The Associated Press reported. Lee said later in a phone interview with The Associated Press that she asked a Secret Service agent to give the President her letter, but he refused and referred her to a White House staffer. Lee said she refused to give the staffer the letter and protested when she was asked to leave. "I said, 'I'm not leaving,'" she said. "They tried to drag me out." Two officers then picked her up and carried her out. "I was afraid you could see under my clothes," she said.