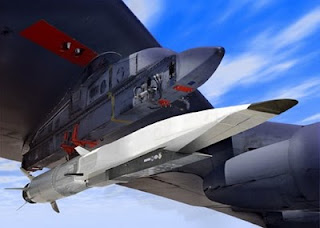 A test of X-51A Waverider, an unmanned hypersonic test vehicle, ended in failure on Wednesday off the California coast near Point Mugu.  A control fin problem resulted in failed ignition of vehicle's scramjet just seconds after launch.  "Controllers realised they had a problem just 16 seconds after the
Wave- rider’s rocket booster engaged. When it detached 15 seconds later,
the machine quickly lost control and disintegrated, sending the remains
crashed into an area of the Pacific Ocean north-west of Los Angeles...," reports The Independent."This was third test of hypersonic plane. "The first test flight of the experimental jet in 2010 was largely successful, with the Waverider reaching a velocity of five-times the speed of sound for three minutes. A problem with the rocket booster not separating from the main craft sent the second trial falling into the sea last year...With only four of the X-51A vehicles having been built, it is unclear when or if the final model will be used.," adds article. A previous post provides more coverage on X-51A Waverider. We can only hope military fails in bid to launch weapons at hypersonic speeds to reach targets in literally minutes! Please drop below fold to view animation on how Super Combustion Ramjet (Scramjet) works with no moving parts.