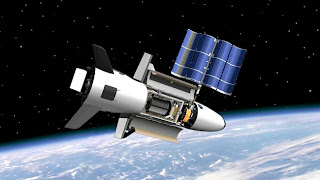 The Air Force's X-37B space plane may be near end of initial mission, reports CS Monitor article.  The spacecraft, also known as Orbital Test Vehicle 1, launched April 22nd and built for 270 day flights, suggests it may be on homestretch.  The mission of the secretive X-37B is still a subject of much speculation.  Ted Molczan, a veteran skywatcher, observes  "ground tracks that nearly repeat after two, three or four days have long been a feature of U.S. imaging reconnaissance satellites, which leads me to suspect that X-37B is carrying experimental sensors for that purpose". The spacecraft may be testing experimental sensors before they are placed on expensive satellites?  X-37B will land at Vandenberg AFB if the mission is completed as planned.