ancient knowledge of sirius b 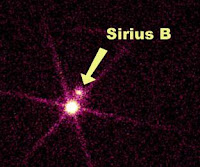 An African tribe, the Dogon, may have possessed ancient knowledge of the white dwarf companion star, Sirius B, not discovered in contemporary times until 1978. The west African tribe is known for their cosmogony. A Daily Galaxy article reports the Dogon, who live in what is present day Mali, knew precise information of the Sirius star system for 3,000 to 4,000 years. Robert Temple, a Royal Astronomical Society fellow, read some of the material on Dogon cosmogony in the sixties and asked the question, "...how the isolated Dogon could have known for hundreds of years that Sirius, one of the brightest stars in the sky, has an invisible companion: Sirius B"? There are critics on whether information given to the Dogon was by a race of people from the Sirius star system, but there is evidence the Dogon were aware of the binary star for hundreds of years.