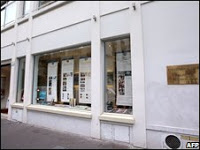 from bbc: The Church of Scientology in France will be tried in court for "organised fraud", according to legal sources. The lawyer for one of the plaintiffs behind the case told the BBC that if convicted the controversial Church could be banned.

The Church has faced stiff opposition in France as well as Germany, where it has been declared unconstitutional. The French branch of the Church of Scientology said it had been cleared of "numerous" similar charges. It said such charges should not be brought to court again.

This case stems from claims by a woman who said she was approached by Scientologists in a Paris street in 1998 and offered a free personality test. She says she ended up handing over more than 20,000 euros (£16,000) for courses, books, illegally prescribed drugs and an "electrometer" supposed to measure fluctuations in her mental state.

massive takedown of anti-scientology videos on youtube
from eff: Over a period of twelve hours, between this Thursday night and Friday morning, American Rights Counsel LLC sent out over 4000 DMCA takedown notices to YouTube, all making copyright infringement claims against videos with content critical of the Church of Scientology. Clips included footage of Australian and German news reports about Scientology, A Message to Anonymous/Scientology , and footage from a Clearwater City Commission meeting. Many accounts were suspended by YouTube in response to multiple allegations of copyright infringement. YouTube users responded with DMCA counter-notices.

upadte: alleged 'rights group' involved w/ removal of anti-scientology videos from youtube doesn't exist; says eff
from wikinews: On September 4 and 5, at least 4,000 anti-Scientology videos were removed from the video sharing website, YouTube. The videos removed were done so by a single Digital Millennium Copyright Act (DMCA) notice by an alleged 'rights group' called the American Rights Counsel LLC, which Wikinews has confirmed, does not exist beyond the scope of those requests.

In an exclusive interview with Wikinews the Electronic Frontier Foundation (EFF) acknowledged that they "don't know anything about" the Counsel and that any attempt to intentionally commit fraud by filing false DMCA requests, could lead to criminal charges.

"We don't know anything about this group. However, if these DMCA notices were sent improperly, there could be legal remedies. The particulars would depend on the particulars of the situation," Rebecca Jeschke, a spokeswoman for the EFF, told Wikinews.