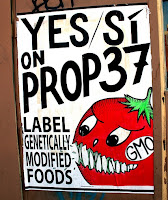 from nomorefakenews.com: Lying down on the road in front of a truck isn’t the best way to end a political campaign, but that’s what the YES ON 37 forces are doing.

In an email sent out on Nov. 9, the PR people for 37 wrote: “They [the leaders of YES ON 37] assume these [millions of uncounted] ballots won’t be in our favor. For this reason the campaign does not want to get involved in the pressuring for counting the remaining votes.”

I guess everybody is a vote-projection expert these days. Wow.

No need to do the actual count, we already know what the score is.

And a few minutes more…

In that email, we learn the brilliant reasoning behind this abject projection of a defeat. Buckle up: “Our understanding of the situation is that the campaign believes these [millions of uncounted votes] are early ballots that were sent in during the beginning stages of the barrage of opposition commercials [by NO ON 37]. These ballots tended vote against Prop 37. They assume the ballots won’t be in our favor.”

I was sure the most insane thing that happened during this fiasco was the early projection of a defeat for 37, by the networks, on election night, with maybe 15 million votes still uncounted. But I was wrong.

This analysis by the YES ON 37 people takes the cake.

But really, what’s going on here is an incredibly naïve approach to politics. YES ON 37 is playing the game by the rules while their opponents are cheating at every turn.

The phrase, “planted the seeds of their own destruction,” comes to mind.We know that NO ON 37 made numerous false statements in their campaign ads. We know they illegally used the seal of the FDA in those ads. That’s a felony. We know the mainstream press torpedoed YES ON 37 in the waning days of the campaign, by diverting the whole issue of GMO labeling into a non-story about whether the FBI had really opened a full-blown investigation into NO ON 37. We know the networks made a criminally early call against 37 on election night. We know millions of votes are still uncounted. We know that computer rigging in vote-counts is easily done.

But YES ON 37 is just folding up their tent and going away.

They played fair and they got destroyed.