Sgr A* Shoots Brightest Flare Ever! 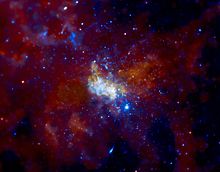 Sagittarius A* (Sgr A*) is believed to be a supermassive black hole at the center of the Milky Way.  A recent Universe Today article reports the Chandra X-Ray Oberservatory recorded largest flare ever from Sgr A*.  "For some unknown reason, the black hole at the center of the Milky Way galaxy shoots out an X-ray flare about once a day. These flares last a few hours with the brightness ranging from a few times to nearly one hundred times that of the black hole’s regular output. But back in February 2012, astronomers using the Chandra X-Ray Observatory detected the brightest flare ever observed from the central black hole, also known as Sagittarius A*. The flare, recorded 26,000 light years away, was 150 times brighter than the black hole’s normal luminosity," reports article.  It is generally believed wandering asteroids or planets get too close and are drawn into the black hole.   The black hole vaporizes the solid body and x-rays emitted in the process. The energy burst is called a flare.  Is it the only possible explanation for increased activity at the center of our galaxy?