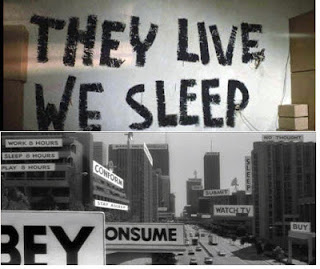 You may be incredulous at the thought of a movie with famous wrestler “Rowdy” Roddy Piper possessing a deeper meaning. But there is a message that John Carpenter’s 1988 film “They Live” conveys to viewers: another race clandestinely controls mankind via sub- conscious messages delivered by all forms of media! Vigilant Citizen (VC) offers in the article, “‘They Live’, the Weird Movie With a Powerful Message,” an impression that  “…movie’s message is becoming increasingly relevant … and freakishly realistic.” Could it be Illuminati-controlled Hollywood made the movie industry wise to their subliminal forms of manipulation almost twenty five years ago?

A catch phrase of human rebels used in movie, “They Live We Sleep,” according to VC, “…describes the fundamental difference between the elite and the masses. Those in power know the truth about the world and possess the means and the power to truly ‘live’. The rest of the population is sedated, dumbed-down and manipulated into a zombie-like status in order for it to be as easily manageable as possible by the masters. The masses ignorance equals a state of endless slumber.”

Carpenter’s movie speaks directly to today’s viewers and suggests ideas far ahead of its time. The hypnotic control of television and a pirate broadcaster’s observation in the movie’s first minutes that “we are living in an artificially-induced state of consciousness that resembles sleep…their intention to rule rests on the annihilation of consciousness!” The drone surveillance of Los Angeles predicts our reality today, or perhaps, Carpenter is an insider with elite access to the wider agenda? Is it predictive programming to get us familiarized with our destined slavish futures?

The present writer agrees with VC, messages are applicable to the Illuminati and the movie is saturated with them! Wow! The pirate broadcaster does suggest our best course of action: “the only way is to cut the signal off at its source!’ The first step to freedom is to struggle to your feet and walk over to the TV to turn it off–permanently!