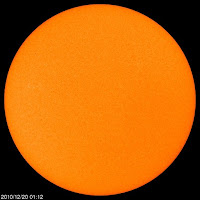 ﻿The lack of sunspot activity seems to support predictions of cold temperatures? Anthony Watts, in an article at Watts Up With That?, predicts a repeat of a Dalton Minimum. Watts recaps solar cycle expert David Archibald's graphs. What is a Dalton Minimum and its weather implications? "The Dalton Minimum was a period of low solar activity, named after the English meteorologist John Dalton, lasting from about 1790 to 1830. Like the Maunder Minimum and Spörer Minimum, the Dalton Minimum coincided with a period of lower-than-average global temperatures. The Oberlach Station in Germany, for example, experienced a 2.0°C decline over 20 years. The Year Without a Summer, in 1816, also occurred during the Dalton Minimum," writes Watts. Archibald also examines interplanetary magnetic field strength. A weaker interplanetary magnetic field means more cosmic rays reach our planet. The measure is taken by a neutron count and it is higher than the previous solar minimum. It seems, yet, another blow delivered to the global warming agenda. This is your solarcast for late 2010.