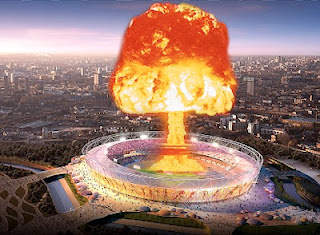 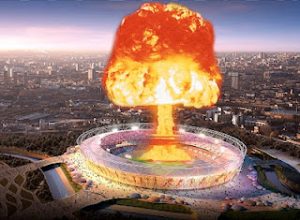 On the eve of opening Olympic cere-monies, a roundup of views offered on occult mega-ritual known as 2012 London Olympics seems in order!  Rik Clay, who died in 2008 at age 25, contributed much to our present expectations.  Clay reminded everyone of the strong alien meme associated with 1984 Olympics. Researchers suggest, in all seriousness, a fake alien visitation is just one possible event!  Illuminati acts of absolution of care seem evident, when you consider Mail Online 2010 short story by writer "Tom Cain," "Olympic Armageddon: How terrorists could send nuclear bomb up the Thames to target London 2012 Games." Another interesting note short story includes a 13,000 casualty count - number 13, an Illuminati favorite - just as projected in one scenario included on page 34 in 2010 Rockefeller report,  "Scenarios for the Future of Technology and International Development." Are they simply aware of each other or working from the same Illuminati playbook?

If casualty count isn't enough, You Tube video "The 2012 Olympic Games Exposed," informs viewer Spooks Code 9, a BBC TV series, is one source of predictive programming in mainstream media, because of its plot outline: "The series begins in 2012 (just after the 2012 Summer Olympics), when London and some of the south east has been evacuated in the wake of a nuclear attack during the opening ceremony of the Games," according to Wikipedia. The video also predicts a biochemical attack on the London Underground. Video concludes saying Illuminati sacrifice at London Summer Olympics will be blamed on Iran - a false flag used as an excuse to start World War III.  Will a terrorist attack also cover up financial scandal, where only way out is to destroy the paper trail? You've been warned!

Alien invasion, nuclear and biological terrorism are all possible Olympic fare.  The occult symbolism with pyramid-shaped flood lights on Olympic stadium, a structure next to it resembling the Tower of Babel and one-eyed (Illuminati) mascots, are real reasons for calling 2012 Olympics - an occult mega-ritual!   Clyde Lewis and Tracy Twyman delve into deep occult symbolism clearly evident on a recent Ground Zero Live!  You can prime yourself further for tomorrow night with Red Ice Radio's recent Olympics Special, two hours of discussion by researchers on occult symbolism embedded in 2012 London event that likely influences us on a subconscious level!  The present writer wouldn't be surprised to see one or more anticipated events actually take place during 2012 Olympics, which seems primed for something!