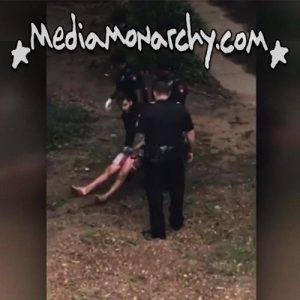 The fire challenge, bicycle killers and 'The Heart Is Deceitful Above All Things' + this day in history w/the Stockholm Syndrome and our song of the day by Echo & the Bunnymen on your Morning Monarchy for August 23, 2018.

I am positive that bots are writing these stories now: ‘Jesus was a Palestinian, Jewish rabbi, he was a person of color that was killed by white supremacy’ — This progressive, inclusive church doubles as a brewery to raise funds for Planned Parenthood (Audio)
https://twitter.com/michaelmalice/status/1032079988672086018

Doctor who served as #homeopathic physician to the #Queen for 15 years killed in central #London crash
https://twitter.com/XEyezWideOpenX/status/1031848829371539456

Inside Scientologists’ Bizarre Plot to Sell Bogus Meat to the Poor
https://twitter.com/mediamonarchy/status/1031218567625297920

helly Miscavige, the wife of Scientology’s leader, hasn’t been seen for more than a decade
https://twitter.com/mediamonarchy/status/1030856234059137024

Asia Argento wrote & directed a movie where she was a prostitute, 7-year old Jimmy Bennett played her son, whom her character forced to crossdress and was raped as a result. A decade later Argento allegedly rapes Bennett while he’s underage, fetishizing him as her son.
https://twitter.com/SecretSunBlog/status/1031428958913540096

#ThisDayInHistory: #August23 w/The 1973 #Norrmalmstorg bank robbery in #Stockholm, Sweden, turns into a hostage crisis; over the next five days the hostages begin to sympathise with their captors, leading to the term "#StockholmSyndrome" (Audio)
https://twitter.com/mediamonarchy/status/1032686419615961088

Flashback: Obama/Biden ’08: And The Crowd Goes… Meh // Obama Selects Joseph Biden As His Running Mate // Obama Announces Biden As Running Mate Via Text Message // Obama Leaves Texters At Altar, Runs Off w/Dinosaur Press // Secret Service On Their Way to Biden's House // Obama's & McCain's VP Picks Won't Matter in November // Obama Selects Biden to Reassure the US Ruling Elite // 1992 Biden Speech: “On the Threshold of the New World Order: a Rebirth for the United Nations” // A Few Questions for Joe Biden That Should Be Answered, Preferably Under Oath // Biden on 9/10: “Real Threat” May Come in “the Belly of a Plane” (Aug. 23, 2008)
https://mediamonarchy.com/2008/08/obamabiden-08-and-crowd-goes-me/