the 45th anniversary of the assassination of jfk

thus was all hope lost, 45yrs ago today

from winter patriot: Forty-five years ago today, the world was changed by an audacious act of terrorism. Ensuing events have confirmed the suspicions that arose at the time: the changes that came in the wake of the terror have been forever, and not for better. Humanity’s last reasonable hope for peace and prosperity was dashed. The last real President of the United States was dead. And all the rest has been decline and fall. John F. Kennedy wasn’t perfect – not by any means. But he was brilliant, compassionate, hopeful of a brighter future for humanity, and willing to fight for that future. Alone he stood between the American warmongers and their goal of establishing an endless quagmire in Vietnam. He chided the Chairman of the Joint Chiefs in private; in public he did the same thing, but more subtly. All the world wept at the news of his death – all except for the most vicious and ignorant parts of it, which lie deep in the heart of the Confederacy. In retrospect, there can be no doubt that the assassination of John F. Kennedy was an inside job, a military coup d’etat, the beginning of the end of America as it once could have been. 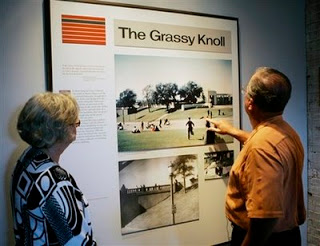 from ap: About 500 people crowded Saturday into the plaza where John F. Kennedy was shot 45 years ago, all agreeing it was right to remember a pivotal moment in American history, even if they didn’t all believe the official line. People stood shoulder to shoulder and bowed their heads during a moment of silence at 12:30 p.m. Some hawked JFK memorabilia or pitched conspiracy theories to visitors. Others offered firsthand accounts of their memories of the killing.

100s gather in dealey plaza for anniversary
from dallas morning news: It was 21-year-old Ben Lawrence’s first time to visit on Nov. 22. Mr. Lawrence, who wore a blue T-shirt with the words “Tyranny Response Team,” said he believes federal agencies were responsible for the assassination of JFK. “There was a conspiracy, for sure,” the Mesquite resident said. “There’s no way Oswald could have squeezed off three shots in six seconds at a target that was down and away.”

from afp: Americans reflected Saturday on the presidency of John F. Kennedy, who was assassinated 45 years ago, as once again a young, inspiring president is headed to the White House. President-elect Barack Obama has often been compared for his lofty ideals and charisma to the late JFK, who was shot dead in Dallas, Texas in 1963. Obama’s cool speech delivery, his intellectual prowess, relative youth and inexperience – the 47-year-old was an Illinois state senator little over four years ago – have been seen by many as direct reflections of JFK. Even the charming families, along with an apparent command of admiration around the world, are touchstones of both Obama and JFK’s broad appeal. But Obama’s character and historic election as the first African-American US president have many people worried about potential threats to his life.

conspiracy theories still swirl around jfk tragedy
from vv daily press: Forty-five years ago Saturday, then-President John F. Kennedy was shot and killed in Dallas, yet the tragedy remains one of the most controversial events in history and has spawned countless conspiracy theories… A Daily Press online poll this week with more than 160 respondents showed that 73 percent believe there was a conspiracy behind the JFK assassination.

witnesses to jfk tragedy reflect back

from cbs11tv: Forty-five years have passed, but to Gayle and Bill Newman it seems like only yesterday. On that fateful day in November 1963 the Newmans, who then lived in Oak Cliff, wanted to see the president. What they witnessed was history.
now compare that with this…

blood-splatter tech buries jfk conspiracy
from techradar: President John Fitzgerald Kennedy was most likely shot from the sixth floor of the Texas School Book Depository – not the grassy knoll, as widely believed. That’s the claim yesterday from a group of scientists who recreated the assassination using modern blood splatter analysis, new human body surrogates and 3D computer simulations. Advances in blood splatter analysis aided the experts in their research. But it wasn’t just innovations here that helped; the team also used some of the “most advanced artificial human heads in the world” for the ballistic tests, MSNBC reports.

on 45th anniversary of jfk assassination, lingering conspiracies tarnish history, professor says
from ascribe: Historians should use the 45th anniversary of President John F. Kennedy’s assassination as a time to focus on the historical event, while debunking still popular conspiracy theories, says a Purdue University historian. “Historians have pretty much ignored the assassination as a historical event, and they need to weigh in against the excesses of conspiracy theory as false history,” says Michael G. Smith, an associate professor of history who will teach a spring semester course on the Kennedy assassination. “We need to begin to respect the dead rather than distort their memory… It might take a new generation of scholars, those born after the ‘Baby Boom,’ who did not live through the event and who do not have a personal or political stake in President Kennedy’s loss, to come to grips with his assassination. We need to mark it as a simple crime, a murder solved and closed, as well as understand it as a complex event that has been manipulated and misread.”

what were the moments before oswald shooting like?
from cbs11tv: “It’s hard to believe that anybody is still interested in it at 45 years,” Jim Leavelle, a detective in the JFK assassination investigation, said with amazement recently. “Had you asked me six months after the incident happened, I would have told you, ‘Give it another two or three months and nobody will ever mention it again.'”

One response to “the 45th anniversary of the assassination of jfk”