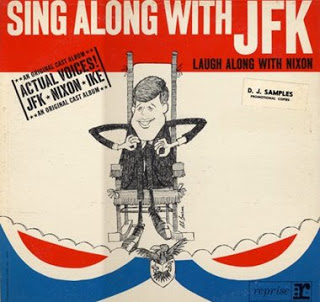 ‘sing along with jfk’

from wfmu: The assassination of John F. Kennedy may have marked the end of American innocence, but it crowned Vaughn Meader's First Family LP as the king of the cut-out bins for decades, a position it still holds to this day. What a shame that this fate was not bestowed upon George Atkins and Hank Levine's Sing Along With JFK LP instead. In 1961, Atkins and Levine took snippets of JFK's early presidential speeches, added an accordian player and a chorus, and set Camelot to music. JFK's pal Frank Sinatra was good enough to put out a small pressing of the LP on his Reprise label. Although the same technique has been applied by others (including the George W Bush Singers), the inspiration of the Sing Along With JFK record has never been equaled, even (and especially) by Atkins and Levine's RFK/LBJ-based followup, Washington Is For The Birds.

Here are all six musical tracks from the LP Sing Along With JFK:
Begin Anew For Two, Let Us Begin Beguine, Alliance For Progress Bossa Nova, Ask Not Waltz, The Trumpet & Let The Word Go Forth