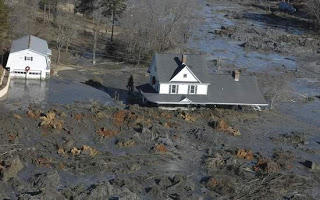 from tennessean: Millions of yards of ashy sludge broke through a dike at TVA’s Kingston coal-fired plant Monday, covering hundreds of acres, knocking one home off its foundation and putting environmentalists on edge about toxic chemicals that may be seeping into the ground and flowing downriver. One neighboring family said the disaster was no surprise because they have watched the 1960s-era ash pond’s mini-blowouts off and on for years. The ash slide, which began just before 1 a.m., covered as many as 400 acres as deep as 6 feet. The wave of ash and mud toppled power lines, covered Swan Pond Road and ruptured a gas line. It damaged 12 homes, and one person had to be rescued, though no one was seriously hurt.

tennessee disaster 3x larger than original estimate
from thinkprogress: On Monday, toxic coal sludge burst through a retention wall in eastern Tennessee, causing massive property and environmental damage. Federal studies have shown that coal ash contains “significant quantities of heavy metals like arsenic, lead and selenium, which can cause cancer and neurological problems.” The incident — already being called the “largest environmental disaster of its kind in the United States” — may now be even worse than originally anticipated. Tennessee Valley Authority officials “initially said that about 1.7 million cubic yards of wet coal ash had spilled” in the disaster. Yesterday, however, they “released the results of an aerial survey that showed the actual amount was 5.4 million cubic yards, or enough to flood more than 3,000 acres one foot deep.”