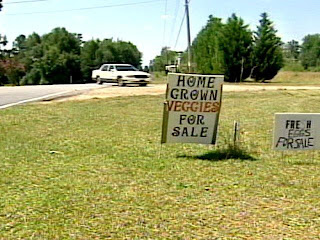 from msnbc: The sign on the side of the road reads, "Home grown veggies for sale," but thieves apparently ignored the words, "for sale". The theft happened over the weekend at a home along Bennetts Bridge Road in the Greer area of Spartanburg County. The homeowner didn't want to be identified, but told deputies that someone stole 40 pounds of ripe tomatoes, 20 pounds of lima and butter beans and took all of her cucumbers and squash. The victim told WYFF News 4's Mike McCormick that thieves have hit her garden before, but this weekend's incident was the worst she's ever seen. The woman said she has been growing and selling produce for 16 years and she's seen more theft this year than ever before. She blames the economy for the crimes.