US soldier linked to wikileaks ‘collateral murder’ video is charged 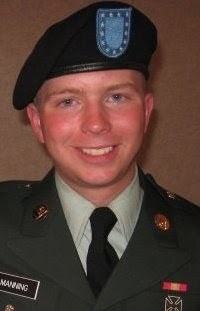 from washington post: An Army intelligence analyst has been charged in connection with the leak of a controversial video of a U.S. helicopter strike and the transfer of more than 50 classified State Department cables, the military said Tuesday.

Pfc. Bradley Manning, 22, was detained in Kuwait in May after Wikileaks, a whistleblower Web site, released the video, which it titled "Collateral Murder." The footage, taken by cameras on U.S. Apache helicopters, shows several civilians, including two Reuters news agency employees, being killed in a U.S. strike in July 2007.

Among the materials Manning is accused of transmitting to "a person not entitled to receive them" are the video and more than 50 classified diplomatic cables. According to the charge sheet, he allegedly downloaded more than 150,000 cables in all.