from oregon truth alliance: William Rodriguez was the custodian in charge of three 110 story stairwells in the North Tower of the World Trade Center on the day it was destroyed. As the holder of a master key he was able to personally save fifteen people from certain death and helped NYC firefighters evacuate many others from the Tower before it fell. Rodriguez will share his harrowing experience at a special presentation, Tuesday, November 6th at 7 pm, at Berbati’s Pan, 231 SW Ankeny in Portland, Oregon. He will also explain his deep disappointment with the serious inadequacies of the 9/11 Commission Report.

Rodriguez has been a guest at the White House on five occasions and has been recognized as a “National Hero” by the Senate of Puerto Rico. Rodriguez has used his recognition as one of the true heroes of that tragic day to help draft and pass legislation on behalf of victim’s family members and survivors. He also helped raise millions of dollars for the victims of 9/11 and their families and to bring attention to the health concerns of thousands of first responders who are now sick with "Ground Zero Syndrome." He also lobbied for the creation of the 9/11 Commission.

Though he appeared before the Commission, his private testimony was excluded from the final report. Rodriguez now questions the serious gaps in the official story. He calls for a thorough, energetic and internationally-based investigation to uncover and explain every possible aspect, failure and contributing circumstance leading to the 9/11 events. A New Jersey resident, Rodriguez worked in the North Tower of the WTC for almost twenty years. Almost daily he met with co-workers for breakfast in the famous 106th floor Restaurant in the North Tower. Nearly two hundred people, including most of William's friends, were in the restaurant on September 11, 2001. None survived.

Tickets are $10 and include a free DVD exposing the deep flaws and unanswered questions remaining in the 9/11 Commission Report.

update: some photo/video of william rodriguez 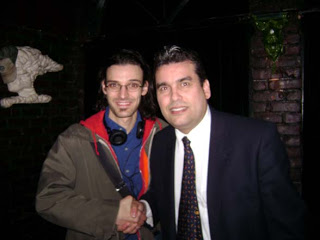 and here's the audio