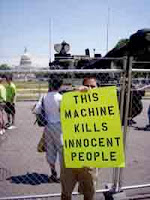 arms makers are the only ones winning war of terror

from sydney morning herald: Arms manufacturers are making record profits from the war on terrorism and unprecedented spending on weapons programs.

The massive earnings have drawn condemnation from Australian defence experts, who say expensive weapons such as jet fighters, warships & satellites are not the way to combat terrorism.

The world's biggest arms maker, Lockheed Martin in the US, maker of fighter jets including the F-35 Joint Strike Fighter, which Australia is buying, announced last week it had increased third-quarter profits by 22 per cent to $US11.1 billion...

Northrop Grumman, maker of aircraft carriers, submarines and bombers, increased profits 62 per cent to $US489 million.

At General Dynamics, maker of the Abrams tank, which Australia has just bought, profits climbed 24 per cent to $US544 million.

Hugh White, professor of strategic studies at the Australian National University, said the big-ticket weapons were designed to contain China, not combat terrorism.

"They don't admit to it. They sell it to the people as a response to terrorism, but that is not what they are doing," Professor White said.