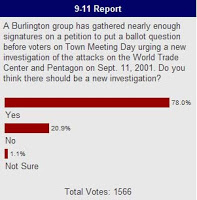 9/11 question may go to vermont voters

from burlington free press: Burlington voters on Town Meeting Day will be the first in the country to vote 'yes' or 'no' on reopening the investigation into what happened Sept. 11, 2001.

As of Jan. 4, a local group had gathered 1,240 of the approximately 1,350 signatures (5 percent of registered voters) required to put the question on the ballot, and a member of the group, Burlington attorney Frank Haddleton, expressed confidence Monday that they now have more than enough signatures.

The question would ask the Vermont congressional delegation to "demand a new, thorough, and truly independent forensic investigation" to answer "the many questions" the group says remain about what happened the day planes commandeered by terrorists smashed into the World Trade Center and the Pentagon.

In September, the council unanimously passed a resolution promising they would honor the Vermont tradition of allowing such questions if they garner enough signatures, "whether or not they like the questions or agree with the petitioners."

Monday, the council agreed unanimously that they wouldn't vote on putting the 9/11 question on the March ballot after City Attorney Joe McNeil said the September resolution had put the council views on record and that the question would be on the ballot if the signatures were submitted by Jan. 25.

The group said in a letter to the council that it doesn't "advance any particular alternative theory" about what happened Sept. 11, 2001, but thinks the day's aftermath, including wars in Afghanistan and Iraq, are so serious that a new investigation is warranted "to get answers to hundreds of questions raised by independent researchers, members of the intelligence community and family members of 9/11 victims."

The attacks, the letter said, have been cited as justifications for the wars, "wiretapping, the USA PATRIOT Act, torture, indefinite detentions without charges, and the recently passed Military Commission Act that suspends the writ of habeas corpus. We maintain that until the serious, credible questions about 9/11 are addressed, the government has no right to ask us to compromise the Constitution or engage in any new wars again terrorism."

The group's spokesman, local author and musician Marc Estrin, said the ballot item would be the first of its sort in the United States.

"We're all very pleased that the council voted not to interfere and let it go forward if we come up with the signatures," Haddleton said.