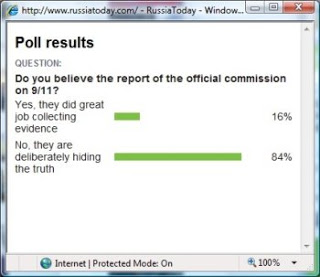 US citizens demand truth on 9/11
from russia today: Seven years after the 9/11 tragedy in New York, there are many people who say they don't trust the official version of events. The U.S. government denies all conspiracy theories but skeptics say there are still more questions than answers.

from steve watson: A new poll from a major Russian news outlet reveals that 84% believe that the truth behind the 9/11 attacks is being deliberately hidden by the U.S. government. At time of writing, the poll on the Russia Today website indicates that only 16% of readers feel that the 9/11 Commission report represents the full extent of the evidence as to who carried out the attacks over seven years ago. The 84% figure mirrors almost exactly that of similar polls conducted in 2006 and 2004.

russia state tv discussion on 9/11 following 'zero' broadcast
from 9/11 blogger: YouTube links for Friday evening's historic telecast on Russia state TV Channel One have been posted, and the discussion following the telecast of "ZERO: An Investigation into 9/11" begins halfway through Part 11 - anybody working on an English translation of this?

medvedev likens georgia attack to 9/11
from afp: Russian President Dmitry Medvedev today likened Georgian military action against its breakaway province of South Ossetia to the September 11 attacks on the United States... "Almost immediately after these events it occured to me that for Russia, August 8, 2008 was almost like September 11, 2001 in the United States," Medvedev told a high-profile group of Western foreign policy experts in Moscow... "There were many useful lessons from 9/11 in the United States. I would like the world to draw its own lessons from what happened" in August, the Russian leader said, adding: "The world changed."

former syrian minister: 9/11 an inside job
from jerusalem post: The Syrian government daily Teshreen marked the seventh anniversary of 9/11 this week in a unique fashion: by publishing an article by Syria's former information minister blaming US intelligence agencies for the attacks. According to Mahdi Dakhlallah, in a piece that appeared Wednesday, the intelligence agencies were behind the September 11, 2001 attacks to provide a pretext for a preplanned US plan to invade Iraq and Afghanistan. "These plans were ready and prepared [in advance] - and all that was needed was to find a pretext to begin their immediate implementation," wrote Dakhlallah, in a piece of which excerpts were translated by MEMRI, the Middle East Media Research Institute.

mexico & US find no links since 9/11
from ap: Mexico says it has arrested 12 people on terrorism charges in the years since the Sept. 11 attack on the U.S., but an official said none were linked to Muslim extremist groups like al-Qaida nor were any planning to strike in the United States. Officials from both nations say there hasn't been any sign of the southern U.S. border becoming an entry point for terrorists, as had been feared after the suicide jetliner hijackings that struck New York and Washington. 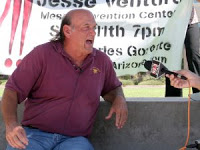 from east valley tribune: Jesse Ventura, the former Minnesota governor and professional wrestler, accompanied a state senator to Arizona’s 9/11 Memorial on Thursday to press his claims that the government isn’t telling the truth about the attacks on the World Trade Center and the Pentagon. “I think it’s growing and growing with the population that more and more of us are questioning what happened that day, and we’re also looking to find out if the truth was withheld from us,” Ventura said. “And the more you study it, the more difficult for me it becomes to believe what my government told me.”

cynthia mckinney at 9/11 1st responders event
from run cynthia run: Cynthia McKinney, Green Party Presidential candidate, talks at a benefit for 9/11 First Responders. A disproportionate number of First Responders are ill as a result of the toxic conditions at the 9/11 site. The Gov't does not acknowledge the toxic conditions nor is it offering significant support to the First Responders or their survivors. One key to changing that is a House Bill HR 3543 providing such resources. Cynthia McKinney supports such legislation and would go beyond that.

decade worth of messages, interviews from osama leaked to web
from wikinews: Ten years of messages and interviews with al-Qaeda leader Osama bin Laden have been leaked. Translated by the United States Central Intelligence Agency (CIA), the documents were posted on a blog Friday.

Posted to Secrecy News blog on September 12, and copied to similar sites including Wikileaks.org, the ten years of messages span from 1994-2004. The packet, issued in 2004, is nearly 300 pages, and labeled "official use only". It was translated by the Foreign Broadcast Information Service (FBIS), a division of the CIA, and includes interviews with bin Laden from various news agencies and also includes messages he sent directly to the United States.

One message includes bin Laden's denial of having anything to do with the September 11, 2001 attacks in New York City, Washington, D.C. and Pennsylvania.

"Following the latest explosions in the United States, some Americans are pointing the finger at me, but I deny that because I have not done it. The United States has always accused me of these incidents which have been caused by its enemies. Reiterating once again, I say that I have not done it, and the perpetrators have carried this out because of their own interest," said bin Laden on September 16, 2001, just five days after the attacks.

from threat level: Americans' fear of a terrorism could create a mass outbreak of a psychosomatic illness - even in the absence of any real attack - creating a fake epidemic that could overwhelm hospitals attempting to treat real victims. Adding to the confusion, the symptoms of a mass pyschogenic illness look much like symptoms of an anthrax attack, avian flu outbreak or chemical attack.

At least that's what the feds warned hospitals in a nonpublic 2006 communique recently published by the government sunshine site Wikileaks... In fact, the feds suggest that there's already been a totally terrorism-fear-created illness in California where no one was actually sick from an attack. In that case, a man walked into a California bank in October 2003, sprayed an aerosol can into the air and then left. Employees and customers became ill, though investigators found there were no biological or chemical agents in the air. (Note: proof of this incident is attributed to a November 2003 FBI report that is also considered too sensitive for the public's eyes.)...

And perhaps most seriously, after the deadly sarin gas attacks in Tokyo in 1995, some 5,000 people went the hospital -- claiming to have symptoms, despite the attack's rather small radius. Twelve people were killed by the gas and 54 others sustained serious injuries.

The analysis recommended that the government and health system educate people about chemical and biological attacks so they can recognize real symptoms, as well as quickly isolating both real and psychosomatic victims in the case of an attack or perceived attack.

The July 5, 2006, analysis entitled Fear of Terrorist Attack Could Trigger Mass Psychogenic Illness (47kb PDF) from the the Homeland Infrastructure Threat and Risk Analysis Center is not classified. Instead it is labeled For Official Use Only (FOUO) -- a designation that allows the data to be shared with people without clearances, but away from the public eye. Such material is usually not available through government sunshine requests.

hackers block qaeda’s 9/11 anniversary terror tape
from hindustan times: Hackers prevented Al Qaeda from releasing a videotape to mark the seventh anniversary of 9/11. Al Qaeda has traditionally issued a video or audiotape by either Osama bin Laden or Ayman al Zawahiri, the terror network’s two leaders, to mark their massive terrorist attack on the US. As-Sahab, Al Qaeda’s media unit, had indicated earlier this week that it would post such a videotape on September 11. As-Sahab had banner images on the internet showing a silhouetted head with a question mark and the words, “Wait 11 September”. The US-based intelligence group IntelCenter had speculated the video would be a message from Osama or Zawahiri with a recording of the last will and testament of Mohammed Atta, one of the leaders of the 9/11 attackers. Sources close to US intelligence said, “Hackers knocked out Al Qaeda’s online means of communication, thus preventing them from posting anything to commemorate the anniversary.” Western intelligence suspects two hackers who have targeted Islamicist sites before were responsible: Aaron Weisburd from Internet Haganah and Rusty Shackleford from the web group My Pet Jawa.