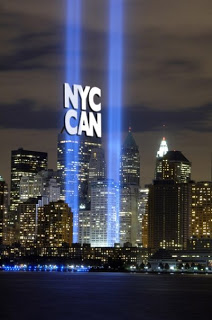 from world of 9/11 truth: Yesterday afternoon [oct8], Justice Edward Lehner of the State Supreme Court rubberstamped Referee Louis Crespo’s recommendation that the decision to establish a local commission to investigate the events of September 11th not be put before the voters on November 3rd.

After showing interest in weighing both sides’ arguments in the hearing, the Judge’s short decision gives no indication of having considered the arguments put forth in the Petitioners’ memorandum of law, nor any acknowledgement of the need for a new investigation, which the City of New York callously dismissed as “irrelevant”.

On a dark day for democracy, the patriotic call for answers by hundreds of 9/11 families, first responders and survivors has been stifled, and the will of the people of New York City once again denied.

Judge Lehner ruled that modifying the petition to make it “legally permissible” would result in it being “inconsistent with the law sought by the signatories of the Petition” despite the fact that all 80,000 signatories agreed by signing the Petition that “If any provision of this law is held to be unconstitutional or invalid for any reason, the remaining provisions shall be in no manner affected thereby but shall remain in full force and effect.”

The deadline for inclusion on the ballot falls just before the election, making it possible to appeal Judge Lehner’s decision. NYC CAN is weighing all options and will make an announcement early next week on this issue, as well as on how it will be moving forward on other fronts. Regardless of the outcome in court, the quest for answers continues full throttle.

This fight is only the beginning.

mythbusters message board says 'topics of 9/11 will be removed'*

3 heroes of 9/11 die of cancer in 5 days
from nydailynews: A firefighter and two cops who worked at Ground Zero in the days and weeks after Sept. 11 have died of cancer in the past five days, the Daily News has learned. Family members and advocates are blaming their deaths on toxins released into the air after the twin towers collapsed - and they're urging Congress to act on a bill that would help pay for their medical care. "Everybody is denying that this stuff is connected to 9/11, but it is," said Stephen Grossman, whose son Robert died of cancer on Friday at the age of 44. Robert Grossman was a police officer in Harlem who worked at Ground Zero for several weeks after Sept. 11. "He never once said he was sorry he went down there," Grossman said. "None of them walked away even though they all knew it was really dangerous." The day after Grossman passed away, Firefighter Richard Mannetta, 44, died of cancer. And last Wednesday, 37-year-old Police Officer Cory Diaz died of cancer.

fmr danish pm warned wtc would collapse
from paul joseph watson: During a recent interview on Danish television, the former Prime Minister of Denmark admitted that he received a message 5 to 10 minutes beforehand telling him that the south tower of the World Trade Center was going to collapse, prompting questions as to why the victims and rescue personnel inside the building didn’t get the same warning. Poul Nyrup Rasmussen told Denmark’s largest broadcast television network, The Danish Broadcasting Corporation, that before he walked into his office to hold a security meeting on the morning of 9/11, he got advance knowledge of the south tower’s imminent collapse. “I am told that the first tower has completely collapsed….I received a message 5-10 minutes before it physically happened saying there was impending danger the tower would collapse so I knew disaster was coming” said Rasmussen.