‘A Slice of Heaven’: Lakota Look to Buy Back Stolen Sacred Lands 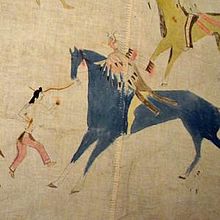 from religiondispatches.org:  All across South Dakota meetings are being held this week and next on the various Lakota Indian reservations to try and raise enough money to make a bid on the purchase of lands in Paha Sapa, the Black Hills of South Dakota, considered sacred to the Lakota people. The site is called Oceti Sakowin, Pe’ Sla (The Heart of Everything) in the Lakota language and is considered the place where the Morning Star fell and killed seven Lakota girls/women who were later put into the sky to become the Seven Sisters, the Pleiades, or Wincinchala Sakowi (the Seven Little Girls). The area up for sale this coming Saturday, August 25 is in the shadow of a mountain the Wasicu (white people or, literally: ‘takers of the fat’) call Old Baldy, which figures into Lakota mythology and has been sacred to the Lakota since the Before Time. Pe’sla is part of a complex of sacred sites which include Devil’s Tower in Wyoming and various other sites in the Black Hills, all of which link to Lakota mythology of the union of earth and sky, and many are still used for ceremonies and prayer. As noted in the excerpt above, the Black Hills was set aside for the Lakota people as part of what was then called The Great Sioux Reservation. Less than ten years later the Black Hills was taken in an illegal transaction called the Act of 1877 hurriedly put together after the Custer fight in June of 1876. Although the 1868 treaty could not be changed “unless executed and signed by at least three-fourths of all the adult male Indians” (Article 12), the Act of 1877 was not a treaty but simply an Act of Congress illegally abrogating the promises made nine years earlier. The various bands of the Lakota have fought the theft of the Black Hills since they were run out by miners and soldiers of the US Army. Finally in the 1920s, a case was filed with the Indian Court of Claims, but it wasn’t until 1980 that the Supreme Court ruled in favor of the Lakota. Instead of returning the land, which is what the Lakota wanted all along, the Supreme Court ruled that the Lakota were entitled to $106 million in compensation. That figure was calculated in 1877 dollars at five percent interest per annum. Now, more than 30 years later, the Lakota, some of the poorest people in America, refuse to take the money.