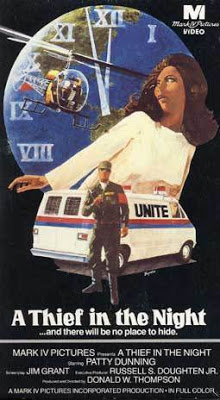 ‘A Thief In The Night’: 40th Anniversary of Original ‘Left Behind’

Forty years ago, 'A Thief in the Night' had scores of people wondering if they'd survive the rapture.

from christianitytoday.com: It's been 40 years since the release of a film that wrecked havoc on the sleep of millions of souls in America and around the world, a film that combined religious themes with the chills of a horror film. No, not The Exorcist. But a year before that: Long before millions of readers were getting worried about being left behind, scores of viewers fretted about the ramifications of A Thief in the Night.

The film told the story of a young woman, Patty Myers (played by Patty Dunning), who wakes one morning to find that her husband has suddenly vanished, along with millions of other people throughout the world. The film brings to life the dispensational view of Matthew 24:36-44 — one will be taken and one will be left — assuming the Rapture of believers takes place before seven years of tribulation … coming without warning, like a thief in the … well, you know. Patty faces the nightmare of a one-world totalitarian government that will usher in the coming of the Anti-Christ.

At the time, it was a radical new way of making a Christian film. There had been Christian movies before, particularly from Billy Graham's World Wide Pictures (usually about a troubled teen who considers smoking a cigarette before being converted at a Graham crusade). But Thief was different, using the conventions of science fiction and horror—everything from the "It's Only a Dream … or is it?" device (from every other episode of The Twilight Zone), to the paranoid "Are They With Me or Against Me?" questions (replace the Pod People of Invasion of the Body Snatchers with the Mark of the Beast people), to the End Credits with a Twist (The End??? from The Blob becomes The End Is Near). (Not coincidentally, Thief's executive producer, Russell Doughten Jr., worked on 1958's The Blob.)

Today, Christian filmmakers like Scott Derrickson (The Exorcism of Emily Rose) consider the supernatural nature of the horror film a natural genre for introducing spiritual themes. But 40 years ago, such themes in a Christian film was a radical idea.

A Thief in the Night also introduced new audiences to the budding Christian rock music scene, featuring Larry Norman's "I Wish We'd All Been Ready," sung in the movie by The Fishmarket Combo. (Check out the groovy/spooky video of the song here; they're also featured in the film's trailer.)

The film's budget was $60,000, a paltry sum compared to today's indie films, rarely made for less than $1 million. Thom Rachford, one of the actors in Thief and now a vice president at Russ Doughten Films (RDF), said that to raise the money, the filmmakers prayed and asked people to invest $5,000 apiece.

Thief was a pioneer of the End Times genre; Jerry Jenkins and Tim LaHaye have cited the film as an inspiration for their Left Behind series. Three Thief sequels were made (A Distant Thunder, Image of the Beast, and The Prodigal Planet) over the next decade.

Video: Complete 'A Thief In The Night' on YouTube